To use the third virtual dosimeter, you’ll need 3M’s new Detection Management Software (DMS), which we include for free with every rental. If you don’t need the third dosimeter, stick with the QuestSuite Pro II software. I have both software versions running 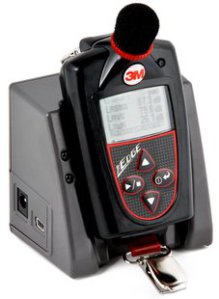 on my computer, and they work completely independently of each other. But I found two Gotchas that are worth remembering:

When you order Edge eg5 dosimeters from RAECO Rents, we'll send both software packages, so you can choose the one you need. Make sure you read the instruction on downloading your data from an eg5. Rent the Edge eg5 intrinsically safe noise dosimeters